It’s hard to imagine a machine operating without grease in it, as the majority of dynamic machine operations run on bearings, which need grease for lubrication. Historically, the utilization of grease to lubricate a wheel and axle occurred just after the discovery of the wheel. The first universal greases were crude forms of lime mixed with vegetable oils. These classes of grease continued to be used for almost all kinds of applications requiring lubrication until the industrial revolution. 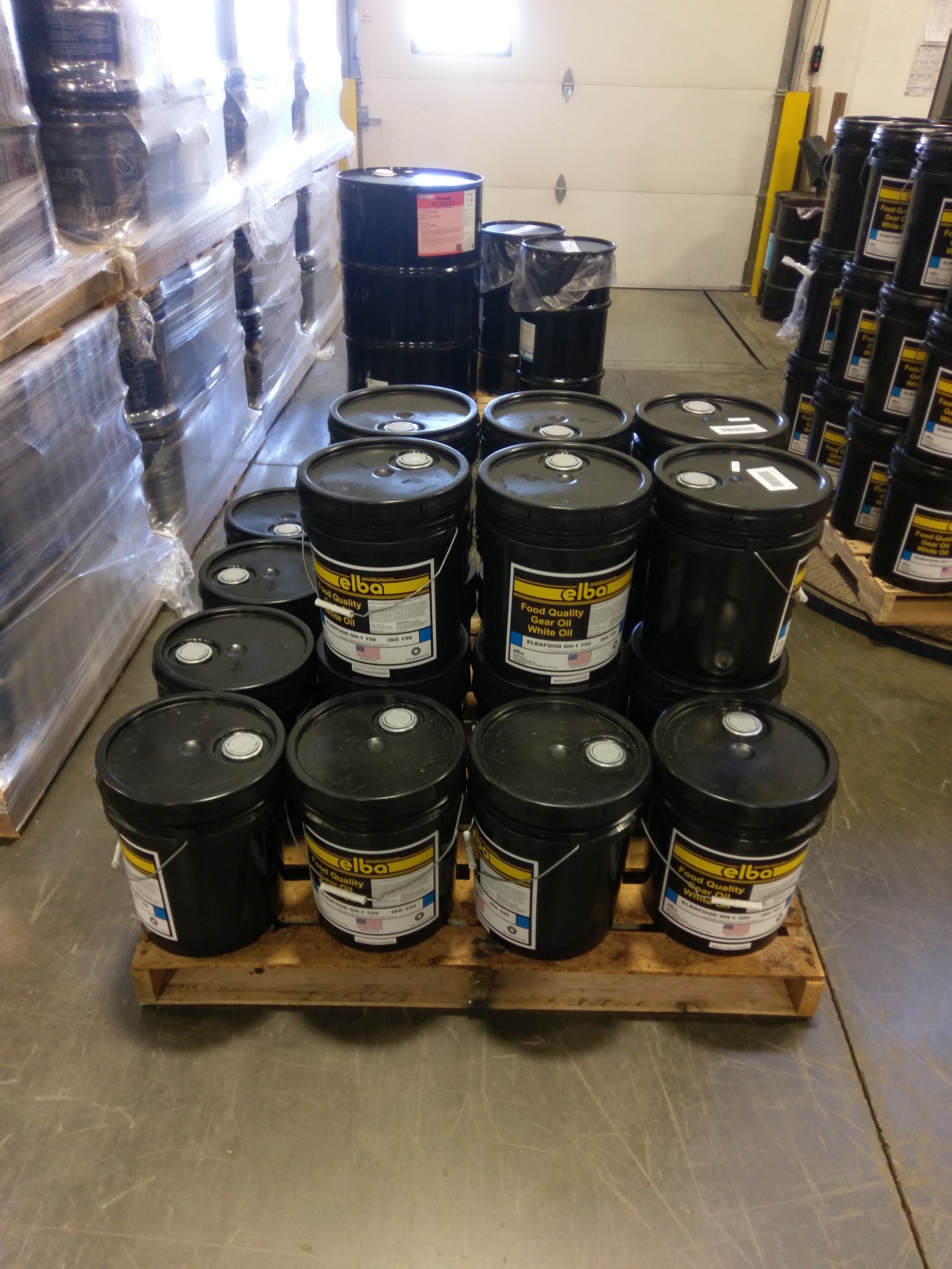 However, in the last few decades, remarkable progress has been made in terms of machine design. This has affected operating parameters and thus the requirements for lubricating greases. As operating parameters like speed, load, temperature, etc., vary significantly based upon the equipment, it is practically impossible for a single grease to handle all the diversified applications. Consequently, a large number of lubricating greases have been developed, resulting in thousands of greases on the market. The concept of one universal lubricating grease covering all types of applications no longer holds true. Also, from a selection and suitability standpoint, the vast array of available greases can be confusing to consumers.

Lubricating greases basically are composed of a thickener (10 to 15 percent), base oil (80 to 90 percent) and performance additives (5 to 10 percent). The total global market size of lubricating greases is about 2.38 billion pounds and consists of lithium/lithium complex, calcium, sodium, aluminum/aluminum complex, calcium sulfonate, clay based, polyurea, etc. By far the most popular greases worldwide are lithium-based greases with a market share of more than 75 percent. While various kinds of greases may be required in a particular plant, there have always been efforts to rationalize and minimize the number of greases from a purchasing and logistics standpoint. This likely has led to the development of multi-purpose greases.

In simple terms, a multi-purpose grease can be defined as a grease combining the properties of two or more specialized greases that can be applied in more than one application. For example, lithium grease can be applied both in chassis and wheel bearing applications of transport vehicles. Traditionally, calcium greases were used for chassis, and sodium-based greases were utilized for wheel bearings. Calcium-based greases have been rated high for water resistance but poor for elevated temperatures. On the other hand, sodium-based greases better cover high temperatures but are not as good in regards to water resistance. When lithium greases emerged in the marketplace, they were found to be superior to calcium and sodium greases, and soon became the most popular multi-purpose greases in industry.

In modern machinery design and construction, machines operate under more severe conditions with the expectation of increased productivity and less downtime. This has made it difficult for lithium greases to satisfactorily fulfill these requirements. The National Lubricating Grease Institute (NLGI) GC-LB specification, which is the most closely followed in the transport sector, also requires greases beyond just lithium 12-hydroxy greases. 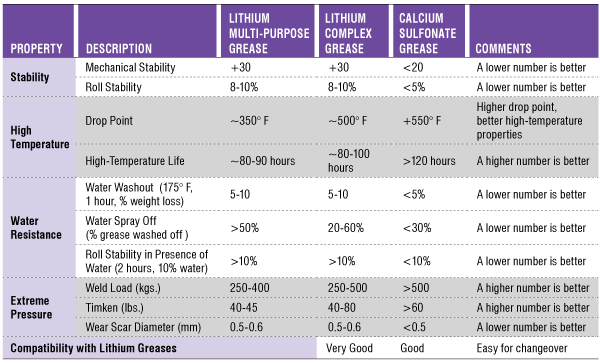 These stringent requirements can be met by more efficient high-performance greases like lithium-complex, calcium-sulfonate, aluminum-complex, polyurea and clay-based greases. However, because of their compatibility with most widely used lithium greases, lithium-complex and calcium-sulfonate greases appear to be the best candidates of these high-performance multi-purpose greases. 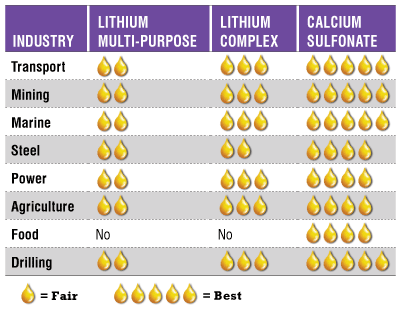 Unlike lithium-complex greases, which need a significant amount of antimony-zinc or other types of additives, calcium-sulfonate thickeners have inherent extreme-pressure and anti-wear properties. In addition, while sulfonates are known to be natural rust inhibitors, lithium-complex greases invariably need rust-inhibiting additives.

Furthermore, calcium sulfonate, by virtue of its thickener property, provides excellent water-resistance properties and does not break down even in the presence of water. To improve their water-resistance properties, lithium-complex greases usually require tackifiers, which are prone to deplete quickly in the presence of water. Calcium-sulfonate greases are also compatible with lithium and lithium-complex greases.

The only limitations with calcium-sulfonate greases are their inferior pumpability and cost. However, recent technological advances have brought these greases up to par with lithium-complex greases. A calcium-sulfonate grease can also be applied in more types of industries compared to lithium-complex greases, thus making it the preferred choice for a high-performance multi-purpose grease.